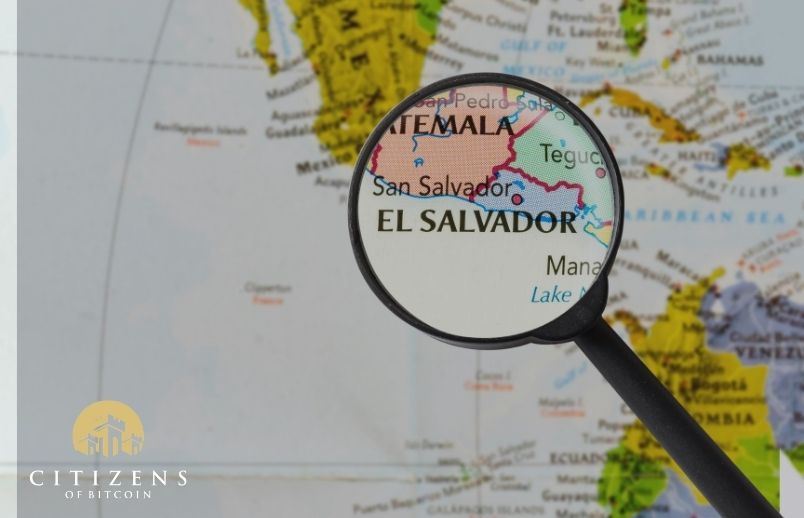 In June 2021, during the Miami Bitcoin conference, El Salvador president Nayib Bukele made an announcement that sent shockwaves throughout the world.

“I will send to Congress a bill that will make Bitcoin a legal tender in El Salvador. In the short term, this will generate jobs and help provide financial inclusion to thousands outside the formal economy, and in the medium and long term we hope that this small decision can help us push humanity at least a tiny bit into the right direction.”

Shortly after this announcement, El Salvador passed the bill and became the first country in the world to adopt bitcoin as legal tender. So, let’s take a broader look at the implications of this landmark decision. In this article, we are going to look at the following:

Dollarization is when a country adopts the US dollar along with, or instead of, their domestic currency. Usually, countries take this step when their monetary system is going through hyperinflation. For example, the Cambodian Riel (KHR) is extremely devalued, so Cambodia opted for the US dollar as its national currency.

However, the story behind El Salvador’s dollarization is a little bit different. El Salvador originally used “colon” as its native currency. From 1993 to 2000, the colon traded at 8.75 per 1 USD. However, on January 1, 2001, the Francisco Flores-led government officially decided to make the USD legal tender. The reasons for this transition given at the time were:

It is critical to remember that El Salvador’s economy was growing around this time and their public and external debt was manageable with no apparent turmoil in the banking system. However, since the dollarization, the effects have been largely negative.

Dollarized financial systems are inherently fragile, as shown in this research paper by the World Bank and the IMF.  As we have seen with different financial crises in Mexico, Argentina, and Eastern Europe, domestic dollarization is far from an economic panacea. These economies are exposed to solvency and liquidity risks. When you undermine the solvency of borrowers and banks, the credit risk that will inevitably happen due to a large devaluation can heighten the risk of deposit withdrawals by concerned depositors. This happens either due to anticipation or a direct reaction to the devaluation.

Solvency risks are a significant problem for dollarized economies. The problem here is that currency mismatches in the events of large depreciation can affect banks’ balance sheets directly or indirectly. Thus, to maintain profitability and satisfy demand, the banks lend a large share of their dollar deposits.

Currency mismatch happens when prices and wages continue to be set in local currency while the main economy is stil dollarized. This could lead to catastrophic depreciation since real and financial transactions are effectively made in different currencies. Moreover, currency mismatches in the event of large depreciations have broad macro systemic ripple effects, particularly in terms of output losses, that compound the deterioration of banks’ financial situation.

Due to dollarization, El Salvador has no control over its monetary policy. They have given over the power of currency supply and interest rates to the United States and the Federal Reserve. It is highly improbable that the Fed Reserve will consider El Salvador or any other country’s specific needs while building their policies. Like it or not, dollarization is never going to be a “one-size-fits-all” solution.

Since the government has no control over the monetary policy, they have to depend on taxes and spending to simulate the economy. This has inevitably caused the country to run higher deficits since they are forced to raise expenditures instead of decreasing interest rates to spur economic growth.

Also, keep in mind that the US itself has an inflationary monetary system. The 2008 crisis and the coronavirus have forced the FED to inflate USD and print trillions of dollars to sustain the local economy. This is devastating for countries like El Salvador that look to the USD as a more predictable and stable currency.

This affects the poorest ones the worst. When a country adopts the dollar, all businesses need to change their prices by converting their native currency to dollars. This leads to a phenomenon called “rounding up,” since the colon-dollar inevitably leads to a fraction, forcing businesses to round up to the nearest dime, quarter, or dollar.

The rounding up drove up the prices of many staples but the workers’ salaries never caught up. Since the poorest Salvadorans have very low incomes, a fraction of these dollars comprise a large part of their incomes, which have seemingly eroded away.

Prior to dollarization, El Salvador could somewhat compete against other developing countries when it comes to trades. However, this has been a significant issue post-dollarization. For example, El Salvador’s exports are considerably more expensive than Chinese exports since the latter purposefully doctors its currency to be undervalued compared to the USD. As such, it is more complicated than ever for El Salvador to remain competitive in the market.

So, what does that mean? Well, let’s checkout this chart made by the Louisiana State University. 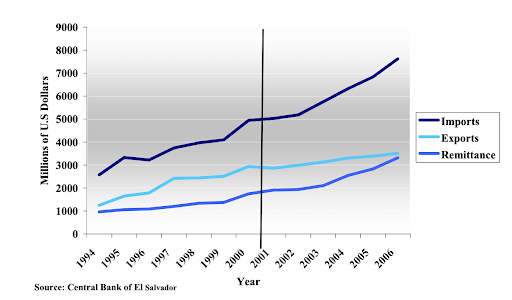 As you can see, post-dollarization, the gap between exports and imports have gone up even more.

El Salvador’s economic growth has averaged just 2.6% per year since dollarization. In contrast, the country was averaging 3.6% in the six years leading up to the change. One of the biggest reasons the country hasn’t experienced growth is because of the lack of direct foreign investments.

Why has that happened? According to Pamela Starr, a Latin America analyst with Eurasia Group – a Washington-based consulting firm – it is because of the following reasons:

Pedro Argumedo, an economist and analyst at Fusades (an economic development organization) noted that until mid-2019, the opposition parties’ negative relationship with the private sector also harmed foreign direct investment in the country. As Argumendo puts it, “The lack of agreement between public and private sector entities created a less than favorable investment climate.”

Finally, like any other country, El Salvador has also suffered tremendous economic losses due to the pandemic. As per this report, the country needs foreign capital growth above $300 million to reach pre-coronavirus pandemic levels.

Remittances are private transfers from migrant workers to their families back home in El Salvador. As we have mentioned before, most of the El Salvadoreans have been forced to leave the country to work in the USA. More than 15% of people born in El Salvador are living abroad, mostly in the United States.

Remittances from the U.S. are a critical source of income for the country, with nearly one-third of all households receiving this payment type. In addition, these remittances form a staggering 20% of the country’s GDP.

The amount of money locked up in these remittances reached $5.7 billion in 2020, which is roughly double that of the entire export income of the country.

For a country so dependent on remittances, it makes sense to opt for Bitcoin payments over fiat. When you consider that Salvadoran families receive closer to $5B per year via outdated services like Western Union, they lose close to $250M via these intermediaries.

Before We Move On. Let’s Catch Up.

Dollarization has helped countries like Ecuador that were in the middle of hyperinflation to stabilize their economy. However, El Salvador never faced hyperinflation to warrant dollarization, and the investments didn’t flow into the country as expected due to various reasons. Also, for a country so largely dependent on remittances, they need a better, faster, and more efficient system than fiat transfers.

Read Part 2 of this series here: The Start Of The Bitcoin revolution

PrevPreviousFeel like spending your Bitcoin in El Salvador?
NextThe El Salvador Bitcoin Series Part 2: The Start Of The Bitcoin revolutionNext