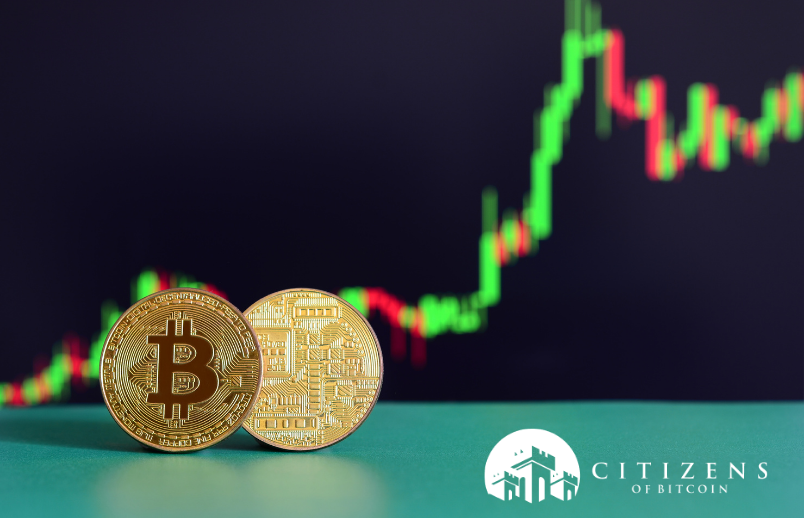 Does this signal a good future or a bad one for Bitcoin’s value? That’s what we’ll explore below.

That latest rise in Bitcoin’s price was a great omen. It came after the launch of Taproot, a major upgrade in its Blockchain system. This served to launch Bitcoin’s value as early as January, with anticipation pushing prices from $30,000 back then to almost double in October.

But that’s not the end of Bitcoin’s glory. Experts have predicted that Bitcoin will exceed $100,000, though their views do differ on how that will occur.

Regardless, Bitcoin is still a volatile currency. With the constant shift in prices creating instability, experts advise caution when speculating in large amounts.

Even then, Bitcoin has achieved a steady value increase in the last few years. This increase has made investors curious about Bitcoin’s possible new heights.

It is not easy to predict Bitcoin’s ever-evolving market. But, experts do have an idea of how that would occur.

Other experts assume that Bitcoin is experiencing a steady increase over time. Some even see that the $100,000 mark is coming soon, one being Jurrien Timmer, manager of the Global Macro.

Kiana Danial, founder of Invest Diva and author of “Cryptocurrency Investing for Dummies,” says the following:

“What I predict for Bitcoin is to be changing on the short term and growing on the long term”.

Optimism – But on a Smaller Scale

Ian Balina is a Bitcoin investor and founder of the crypto research and media company Token Metrics. Ian predicts that Bitcoin will reach $75,000 by the end of 2021. While an optimistic outlook, Ian thinks that the $100,000 is not so far but is not that close as well.

Matthew Hyland takes the opposite route, pushing optimistic predictions to the limit. A technical and blockchain data analyst, Matthew sees that Bitcoin will reach $250,000 by January 2022.

To Hyland, the $100,000 should create a hype effect that’ll drive values to newer heights. Hyland thinks that when Bitcoin reaches $100,000 it will encourage more market participants.

Robert Breedlove is the CEO of the digital assets marketing and consulting firm Parallax Digital. Robert thinks Bitcoin will reach $307,000 by October 2022 and $12.5 million by 2031. To Robert, the pressure from COVID-19 will increase interest in the cryptocoin and therefore increase its value.

As a Consumer – How to Approach the Info

We recommend doing so with caution.

Predictions (even from expert sources) are never solid facts. They’ve educated guesses, albeit from field experts. Though based on recent events and expert predictions, Bitcoin seems destined for a bright future.

Many elements affect crypto coin prices, and Bitcoin is no exception. Factors like supply and demand, public sentiment, news cycles, market events, and scarcity can drive prices higher or lower.

However, some factors have a larger impact than others. This applies to Bitcoin more than other cryptocurrencies. We’ll discuss those factors below.

While digital by nature, there is a limited amount of Bitcoin currency available. Only 18-19 million are in circulation, and the mining will cease at 21 million. This reduced availability is what gives Bitcoin its value appeal.

However, some experts follow a different approach. They see that the primary force behind Bitcoin’s value is the market’s opinion.

Nelson Merchan, Johnson’s Light Node Media co-founder says “That’s really why everybody’s buying — because of the psychological aspect”. With the psychological factor in play, it’s difficult to tell the actual value of Bitcoin without market hype.

Merchan adds “It actually does almost kind of seem like a scam,” even though Merchan says he witnessed his own crypto shares reach millions since he started in 2017.

Merchan also says “I’m a big believer that if it’s not in cash, you don’t really have that money because in crypto, anything can drop dramatically overnight”. From that viewpoint, it’s common for investors to advise allocating 1-5% of any portfolio in crypto.

This touches on the psychological factor and is an extension of it.

A reason why Bitcoin is often bought out to new price heights is the increase in consumer interest. Investors are exploring and buying crypto more often. This leads to increased mainstream adoption, thus price changes.

Crypto technology is another factor. It’s being adopted faster than the internet was adopted during its launch. If this would continue, it’s estimated that Bitcoin’s price may rise even more.

The rate of Bitcoin’s increase is at 113% per year, according to the digital asset management company CoinShares. If consumers become more confident with Bitcoin’s mainstream acceptance, users will reach 1billion by 2024 and 4 billion by 2030.

CoinDesk stated last month that new wallet users increased by 45% from January 2020 to January 2021, reaching 66 million. Currently, Coinbase stated it has now more than 73 million users. Plus, Gemini firm reported in its “State of U.S. Crypto Report,” that 21.2% of Americans use cryptocurrency.

They also have the effect of attracting more investors, thus making it a driving force for Bitcoin.

One of the major factors that affect Bitcoin is the (halving) cycle. It is not that easy to track, however, since it is known as one of the steps to mine Bitcoin. This process result is what creates reward points for mining.

Halving affects the rate where new coins get circled, and this affects the values of Bitcoin holdings.